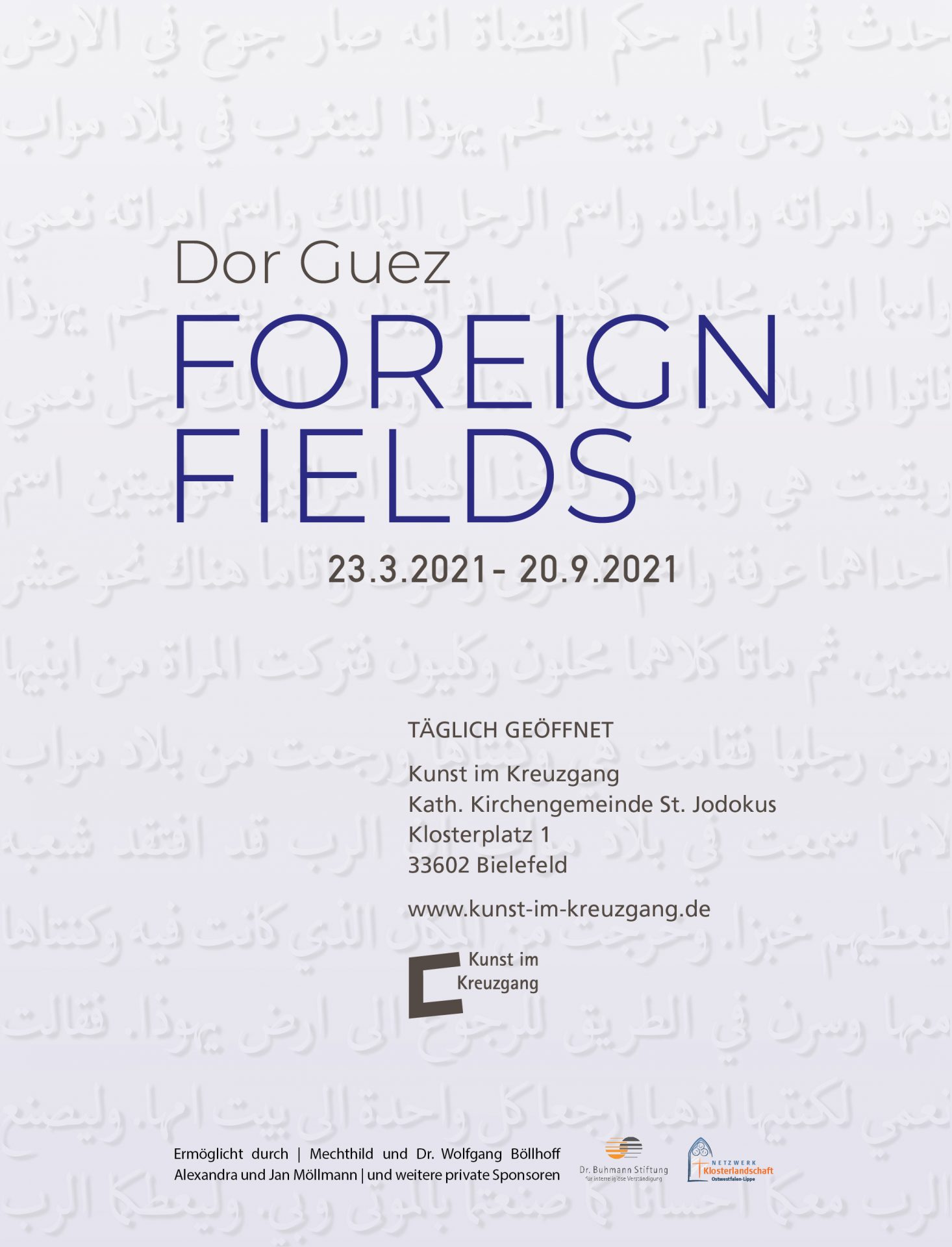 Dor Guez is an enigmatic artist. One can analyze his sources, trace the logic of his work and build on his systems of thought, but the mystery lies in the experience of the works themselves. While there are presumably no riddles intentionally woven into the artwork, they do present the viewer with a powerful conundrum. Guez’s installation “Foreign Fields” (2021) and his “Lilies of the Field” (2019) series of photographs call a deep memory to consciousness. That same movement of thought and experience is what gives the works their dynamism: the unmooring from reality; the need for an order that is as comprehensive as it is beyond doubt; insight into their (im)possibility given their historical, cultural, communicative, religious conditions; critique of ineffective systems of order; a passing preoccupation with the lost, but concrete individual; careful convergence to unities.

Consequently, his creative oeuvre is particularly obliged to explore possible forms of visibility. Far from having preconceived expectations or mentalities, Dor Guez draws on that which is already apparent: Thoughtful reflection on his work turns into thoughtful engagement — a dialogue with the work itself.

Though Dor Guez’s work gives us little to decipher in terms of coded meaning, there is much to see. He operates at the shift between speaking and showing, reading and seeing. “Foreign Fields” embraces a concentrated, probing-by-way-of-looking that seems, curiously, both familiar and strange. A superficial glance reveals extraordinary things. Does it merit closer inspection?

Visitors entering the central aisle of St. Jodokus church find a text in Arabic on the floor. The artist’s decision to quote the Old Testament’s Book of Ruth is a reference to hybridization, in this case as embodied by the book’s protagonist. The book tells the story of Ruth’s conversion to Judaism, of her acclimation and assimilation into the Jewish community before she eventually becomes mother to Israeli kings. Described in Ruth’s story are processes of transition: from her original (Moabite) religious and national identity to that of a converted Jew and her gradual adjustment to Jewish society.

One often experiences a certain uneasiness when faced with an unfamiliar language and its writing; Guez’s presentation evokes that feeling. Objects assume a physiognomy of their own, seem to peer back us from their respective present. Our cultural history is made up of people, stories, places, events — all imprinted on us through thought and language. Guez’s introspective approach succeeds in offering a high-contrast, personal treatise on this thinking. At stake here is the relationship between presentation and representation. As such, the installation “Foreign Fields” is meant to be considered holistically. The artist harnesses apparently common knowledge about the relationship between religion and language, then sets about questioning it visually.

This artistic appropriation bears a direct relationship to the “Lilies of the Field” photographs. Guez’s staged still lifes are infused with a melancholy that expands beyond the present time. The figurative story of Ruth en route to Bethlehem with its symbols of nature, familiar from the Bible, is directly linked to what the photographs depict, to the idea of the Holy Land and the nature described within it.

Everything is interconnected; narratives are set in motion. Language and nature are charged, exposed and made visible in Guez’s work. Yet in artistically contextualizing this approach, he also points to how our contemporary perception of images and language functions. The artist practices a self-imposed rigor, deliberately avoids presenting a focused version of reality that exudes objectivity. His photographs are at once unsettling and familiar, fraught and appealing.

But even that cannot entirely explain the fascinating paradox of Dor Guez’s visual worlds: Symbols and motifs are recognizable, yet intentionally vague in terms of what they aim to reveal. We find clues to follow, references to read, but it is ultimately his precise, artistic way of looking at things that makes us think about reality and the possibilities of its conditional representation. His works suggest novel possibilities, exposing all that is intriguing about the seemingly mundane and familiar. Traces of the past reappear in new guises. Everything is there, but in a modified form; the old is inevitably repeated in the new, which itself eventually vanishes.

Dor Guez is an artist and a scholar. He was born in Jerusalem to a Christian Palestinian family on his mother's side and a family of Jewish immigrants from Tunisia on his father's. Guez's photography, video, essays, and lecture-performances explore the relationship between art, narrative, language, and memory. Interrogating personal experiences and official accounts of the past, Guez raises questions about contemporary art's role in narrating unwritten histories and re-contextualizing visual and written documents. In the past 20 years, his studies and artistic work focus on archival materials and photographic practices of the Middle East and North Africa, as well as mapping traces and structures of violence in the landscape.

Guez's installation, Foreign Fields, consists of two bodies of works: The first, Lilies of the Field (2019) is a series of photographs, while the second commissioned piece consists of a site-specific text work at the heart of Bielefeld’s church.

“Lilies of the Field”

Mapping connections between historical archives, contemporary photography, and performance, Guez’s photographic series “Lilies of the Field” mines the rich historical and mythological dimensions of Jerusalem as a site of religious and political projection. Lilies of the Field is comprised of luminous, mysterious prints of pressed floral and plant arrangements that the artist discovered in his research of the American Colony archives. The flowers that Guez’s project highlights represent a diversity of flora indigenous to the holy land, and the areas surrounding the Old City of Jerusalem. As popular souvenirs for tourists and missionaries making religious pilgrimages, the pressed flowers in themselves document different forms of devotional labor, from the work of the artisans who pressed the flowers, to those who made the journey and acquired the flower arrangements as a memento.

Selected by Guez from the American Colony archive in Jerusalem, these plant-based objects are embedded with contradictions implied by a discrete piece of nature – the flower – preserved in resin, frozen like taxidermy game captured by a hunter. Equally contradictory is his use of color which belies the natural conditions of the landscape from which the plants emerged. Guez’s process involves tracing the remnants of this yellow pigment, and photographing the front side of each flora arrangement, and then of the other side of its overlaying sheet, which, over a century, had absorbed most of the carotenoid pigment. By aligning the two images – that of the flowers, with that of the pigmented protective layer – he re-conceptualizes the images to reflect the time that has passed since they were made.

This process produced two photographic series, both photographic negatives. Describing the method of production, Guez writes, “The first, based on the flowers themselves, simulates a photogram of the flowers on a scale of 1:1, while the second, by converting the yellow to its complementary shade on the color spectrum, simulates large- scale cyanotypes. In the latter, blank areas indicate the anthocyanin- pigmented flowers of the original arrangement, which appear to fade under the residue of yellow pigment. With attention given predominantly to the pigment shed by the flowers rather than to the flowers themselves, I undermine the hierarchy between what is perceived as authentic, as opposed to fabricated.”

In Hebrew, to “graze in foreign fields” refers to a person who connects to other cultures or beliefs. Concerning Guez's practice, the borrowed term indicates questions arising from cultural syntheses, acknowledging that culture is never static and never evolves along a single, set route, thus incongruent with the modernist practice of classifying and categorizing.

Guez’s installation inserts vinyl texts from the Book of Ruth in Arabic on the floor of Bielefeld’s local church. When applied within the public domain of the European socio-landscape, the perception of Arabic can often diminish Arab plurality in all of its nuances. This confrontation challenges many viewers with the false perception that Arabic necessarily connects to one religion or one culture. Although the text is experienced by the majority of the local community as an oriental-poetic decoration, it assumes new meaning when it is revealed that the text has been abstracted from a Biblical source that all monotheistic share— dealing with the concept of hybrid, mixing, and creating new forms.

The presence of the Arabic language in a Central European church seems more relevant today than ever, given the changes that Europe in general and Germany, in particular, have undergone in recent years. The presence of the language was also considered a subversive act in the church where the artist grew up since the dominant language was Greek, which is the language of religious rule in the Middle East. As the community in which Guez was raised does not speak Greek, the pastor places an interpreter during the sermon. This action, of translation and mediation, repeatedly emphasizes the core themes in the artist's work. In fact, it can be assumed that such an installation will not be able to exist in the spaces of many Arab centers in Israel.

Guez's choice to quote in full length the book of Ruth in his installation draws parallels between its thematic elements of hybridity, through the protagonist of the story - Ruth the Moabite. The book tells the story of a converted Jew, Ruth, and the process of her acclimatization and rooting in Jewish society, resulting in her becoming the mother of the Israeli monarchy.

In Judaism, it is customary to read Ruth's story on the Feast of Pentecost, the Feast of Harvest, since significant occurrences in the book take place in the field at harvest time. In the works of many European painters throughout history, Ruth is painted in a foreign field, with a pile of harvest next to, or atop her head. Her story connects to the issue of hybridity through a transition from one religious and national identity to her identity as a converted Jewish woman and her adaptation to Jewish society. The familiar graphic description of Ruth, with elements from nature, in Bethlehem, directly connects to the perception of the Holy Land and the descriptions of nature that appear in the artist's work, "Lilies of the Field".

Both bodies of work in Guez’s show are tied with the concept of origin and interpretation through language. Four languages appear in the works: three Latin languages (English-Italian-French) in “Lilies of the Field”, and one Semitic (Arabic) in the text work. Both installations use language as a medium to address the issue of a gap: a gap between source and translation, between representation and authenticity. In Lilies of the Field, the fantasy of place translates itself into a misguided idealization of nature. In Foreign Fields, the subversion is through the use of Arabic in a German church. Both works raise questions about the nature of interpretation - what gets lost when certain information is processed from a particular perspective to create a new form. The instinct to neatly classify and organize people as nations through limiting the existence of hybridity cannot sustain in the present reality, as in fact, we are all hybrids.

Dor Guez received his Ph.D. from Tel Aviv University in 2014 and earned his professorship from Bezalel Academy of the Arts and Design in 2018. He is the founder of the CPA (Christian-Palestinian Archive), the Head of the Master of Fine Arts Program at Bezalel, and the Co-director of Seaport: Mediterranean Curatorial Residency.

Dor Guez dorguez.com received his Ph.D. from Tel Aviv University in 2014 and became a professor at Bezalel Academy of the Arts and Design in 2018. Founder of the Christian-Palestinian Archive (CPA), he heads the Master of Fine Arts Program at Bezalel and serves as co-director of Seaport: Mediterranean Curatorial Residency.